There is a growing interest in the events of the First World War, maybe because there is almost no-one left alive now who fought in that war, and many of us 'forgot' to ask our fathers or relatives about those events, even if some of them took part. The short biography below is a link between Barkham, Accrington and the events of July 1st, 1916; the first day of the Battle of The Somme.

The information below is from Andrew Jackson's website for the Accrington Pals (www.pals.or.uk). While reading through some of it I came across his reference to Barkham and asked if it was OK to use the information on our village site.

The links in the text are to pages on Andrew's 'Pals' site, for those with an interest in WW1 and the Battle of the Somme in particular. You may also want to visit my own site built around my Grandfather's WW1 service with the York and Lancaster regiment.

All photographs on this page are from Lt.-Col. Arthur Rickman's collection, by kind courtesy of his grand-daughter Bindy Wollen. 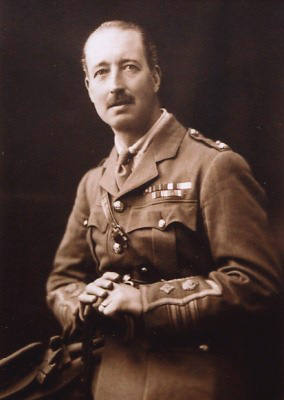 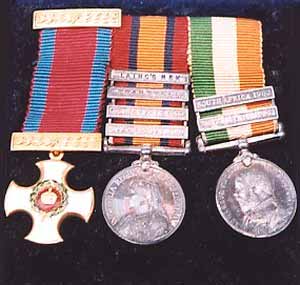 The 1881 Census returns for the town of Barkham in Berkshire show the family of Maj.-Gen. William Rickman and his wife Mary living at the Manor House. The youngest child in the household was Arthur, who had been born in Leicester on 25th September 1874. His elder siblings included Henrietta (aged 10), Marion (14), Ellen (16) and Ethel (18). At least one elder brother was living away from home: 11-year old Graham was boarding at Windlesham School in Brighton.
Arthur was later educated at Winchester College before following his father into the army by obtaining a commission (2nd Lieutenant) in the 2nd Battalion, Northumberland Fusiliers on 26th May 1897. He served in the Anglo-Boer War of 1899-1902, gaining the Queen's Medal with four clasps (Transvaal, Laing's Nek, Orange Free State and Defence of Ladysmith) and the King's Medal with two clasps (South Africa 1901 and South Africa 1902). On 19th March 1903, Arthur Rickman, now a Captain, married Florence Cammell at All Saint's, Knightsbridge; the couple had two children, Rachael and William, before the marriage dissolved. Rickman gained a further promotion to reach the rank of Major before he retired to the Special Reserve on 19th June 1909.

The outbreak of war in August 1914 saw Rickman return to active service. On 1st March 1915 at Caernarvon, with the temporary rank of Lieutenant-Colonel, he succeeded Col. Richard Sharples as commanding officer of the 11th Battalion, East Lancashire Regiment (Accrington Pals). Aside from periods of absence necessitated by wounds or higher authority, Rickman was to lead the battalion throughout the remainder of the war. 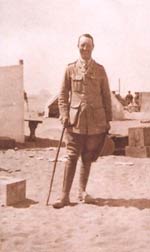 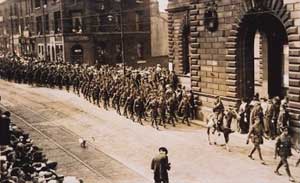 From Caernarvon, the Accrington Pals continued their training at Penkridge Bank Camp near Rugeley, Ripon and Hurdcott Camp near Salisbury. The move from Rugeley to Ripon took in a recruiting visit to the battalion's home towns in East Lancashire. The Accrington Observer & Times was later to remark that Rickman "won the favour and confidence of the Battalion, whilst all who came into contact with him during the brief time he spent in Accrington held him in high regard as an officer and a gentleman." 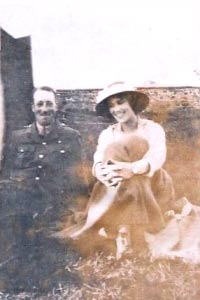 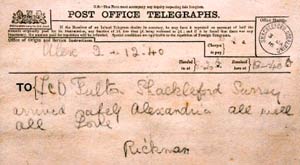 Above; (1) AWR and his fiancee, Muriel Fulton and (2) Telegram sent from Alexandria by AWR to his fiancee, 2nd January 1916

After being sent overseas first to Egypt in December 1915, the battalion reached France in March 1916. In the build-up to the Somme offensive, there was a brief but happy interlude for Rickman when he went home on leave to marry Muriel Fulton in a quiet ceremony on 16th May. During the Pals' fateful attack on Serre on the morning of 1st July 1916, Rickman's headquarters was at the mouth of Sap C, a narrow trench which led out into No Man's Land from the British front line. Rickman's account of the day's events - written as they unfolded - highlights the total loss of communication on the battlefield during that terrible day. Time and time again, Rickman notes that he is receiving back no information from the waves of infantry that had gone over the top between 7.20am and 7.35am. As the day wore on, Rickman began to make preparations for a possible German counter-attack; the trench mortar teams that had been firing from Sap C were pulled back into the front line, and the sap blocked up by bomb stops. Working his way along the front-line trench - which by now was largely blown-in by shellfire - Rickman found very few bays that were defensible. At one point he reported that his front line was defended by only 55 men; there were only two men to work the two Lewis guns, and one of them was wounded. At 9.40pm - 19 hours after he reached the front line - Rickman was knocked unconscious by a nearby shellburst. For his actions on 1st July 1916, he was awarded the Distinguished Service Order (D.S.O.).
Rickman was invalided home, and returned to resume command of the Pals only on 31st May 1917. The following month saw the battalion take part in a successful attack at Oppy-Gavrelle, though on the day it was commanded by Maj. John Kershaw, Rickman having been detailed to be one of the reserve commanding officers. On 11th November 1917, Rickman was wounded and invalided home for a second time when Battalion Headquarters was bombarded with high explosive and gas shells. His return to the battalion coincided with the opening of the German 'Michael' offensive on 21st March 1918. The Regimental History comments that Rickman "was naturally anxious for a few days' respite in which to pick up the reins of office again. These hopes, however, suffered a rude shock when he received orders at 10p.m. to be prepared to move by the following day." Six days later, Rickman led the battalion through a fiercely-contested defensive action in front of Ayette during which 2/Lt. Basil Horsfall won the Victoria Cross.

Barely a fortnight later, the Pals were drawn in to the desperate struggle on the Lys to contain the second German offensive of Spring 1918 ('Georgette'). Rickman's leadership of the battalion throughout the bitter fighting on 12th and 13th April 1918 was recognized in the award of a bar to his D.S.O., the citation for which reads:
For conspicuous gallantry and devotion to duty. This officer commanded his battalion, covering the retirement of the brigade to a new position after both flanks had been turned. He displayed great courage and judgement. The following day he held an extended front against three determined attacks, and when the troops on his right flank were driven in he rallied them under close fire, and formed a defensive flank with them.

Shortly afterwards, Rickman took over temporary command of 92nd Infantry Brigade, and returned to the Accrington Pals only for a short spell in January 1919. On 22nd October 1919, he officially relinquished command of the battalion.

Rickman retired from the Army with the rank of Lieutenant-Colonel in March 1920, and settled with his family in the Wiltshire village of Coombe Bissett. Having held the responsibility of brigade command for much of the previous year, it must have come a great disappointment when he was denied the right to retire with the rank of Brigadier-General.

Aged just 51, Arthur Rickman tragically lost his life in an accident at his home on Friday, 16th October 1925. The Vicar of Coombe Bissett Church, the Rev. C. Wood paid him a fine tribute:
"Colonel Rickman was a most beloved parishoner. He was constantly showing kindness to one or other of his fellow parishoners. Of a bright and cheery disposition, it was always a pleasure to meet him, and one could not be long in his company without being brightened by his happy nature and pleasant way of looking at things. But apart from his great helpfulness in individual cases, he devoted himself with singular disinterestedness to the welfare of the parish generally. His work for the Men's Hut absorbed a great deal of his spare time and energies in the winter months, and he was indefatigable in his efforts to make it a place where all, but more especially the young, could resort for innocent recreation. His work for our church, where he was a regular attendant, gave scope for his unselfish devotion in another direction. As churchwarden he rendered most valuable service....and his constant supervision contributed greatly to the comfort of those who worship here. Few would have suspected from his simple and unassuming manner the distinguished nature of his military service."

Lt.-Col. Arthur Rickman was buried in the churchyard of St. Michael & All Angels, Coombe Bissett on Tuesday, 20th October.

Andrew's acknowledgement on his site for the information; Compiled from the Lt.-Col. Rickman's personal collection, PRO documents WO374/57451 and WO95/2366, "The History of the East Lancashire Regiment in the Great War" edited by Major General Sir N. Nicholson, the London Gazette, the 1881 Census of England and Wales, the Accrington Observer & Times of 20th October 1915, and with the kind help of Bindy Wollen.